Day Four of Training for 2017 Rockies Expedition:Mri Fails At Captaining the Tandem

My first attempt at captaining our tandem bike went about as well as I expected. My second one went a bit better as you can see below...not.

Eventually, however, I was able to do 'well enough' to convince Rob to get on the back where I then pedaled for two rotations before ditching the bike in fear of falling off. This happened another three times before I demanded to be the stoker again and Rob's idea of me being able to get us to town if he ever has an accident died to a most unsurprising death.

Day Three of Training for 2017 Rockies Expedition:Just Another Day Riding 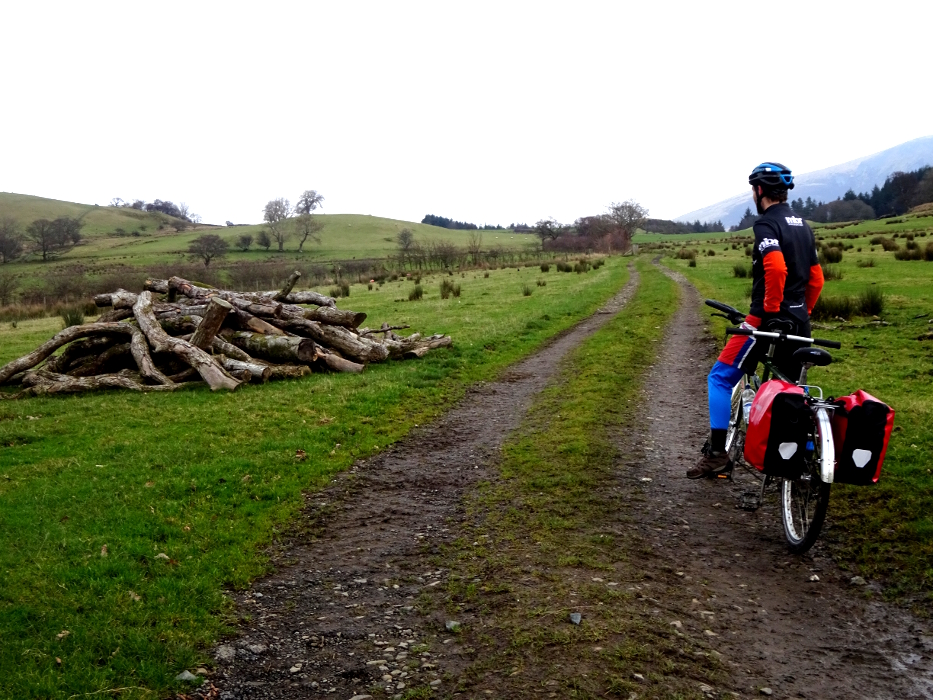 Since our day two of cycle training, Rob’s gone all crazy with the January sales and bought tons of new (and still slightly expensive) gear for our Dawes Double Edge tandem bike. It seems like every day there’s a new item ringing at the door – which would be much more exciting if it wasn’t all just for him. Haha. And though I can’t tell the difference from riding with the old and riding with the new, Rob swears there are many. His ergotec 2 handlebars are more comfortable as they allow for more hand positions and thus stop parts from aching so much, his new saddle is harder than the other and will take some getting used to even with padded shorts on, and the gear change he’s installed is as smooth as a pickup line that actually works. I find the latter to be a bit annoying personally as he’s so excited over how smooth it is that his new game is to try to change gears without me noticing… Though to be fair, when he does change them without telling me first they don’t knock my feet off like the old ones used to – so I guess they are a fair bit better. 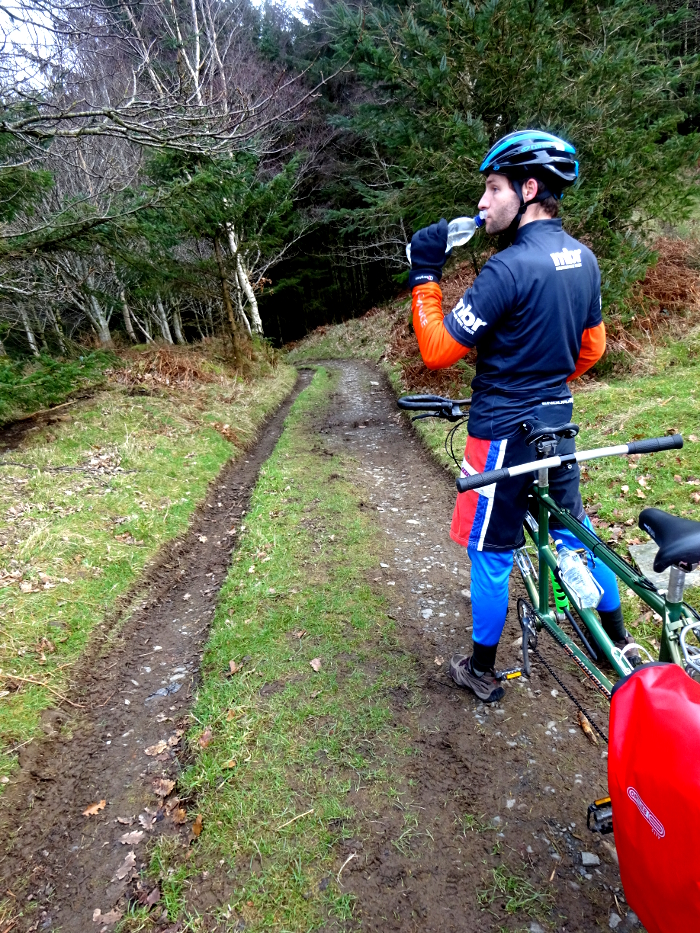 However, our day three of cyce training wasn’t about just testing the new equipment we got for the trip. Rather, it was to gain confidence riding off road with full back panniers (as the front ones ordered still have yet to arrive). We’d already done a small section of off roading a few days ago, but that was on a fairly good track and without panniers. So today we decided to go for a harder, looser track that was also much steeper and windier because we’ve yet to fall off and if we do, it might as well be a good on. Luckily though, today was not that day – if only because Rob rode the brakes the whole way down and I zoned out so I wouldn’t make any accidental wobbles that would end up with our literal downfall. But though the backwheel slid from time to time over the loose gravel and the sharp bends called for a prayer to the Great FSM, we managed to keep the bike staying up right and at an okay speed. We even managed to make it up a 9% grade without stopping once. I know that’s a lot smaller than the insane 25% one we tried to cycle up before, but it was still hard work, especially since I also had to fight back my ashtma, which I managed to do quite successfully. Though if that hill was only slightly higher, we would have undoubtedly ended up with a 5-10 minute forced break before the top. So all in all it was a good day of cycle training...minus my whole, ‘wtf was I thinking that cycling 6000 miles across the freaking Rocky Mountains was a good idea...’ thing. Sometimes I wish I didn’t have all of these ‘great’ ideas. I mean, you’d think I would’ve learned after the whole 13kgs of bananas thing*, but guess not.

*long story short: 10 banana curry is about as appetizing as it sounds, mothers with children do not like a weird man jumping out of a white van asking if they'd like a banana, and three years later, I still do not eat bananas; if you're wondering why we bought 13kgs of bananas - they were only $2.50, for the whole thing, not per bunch

Day Two of Training for 2017 Rockies Expedition:Already Daydreaming of Cars

Not a very confident title for two people planning on cycling 6000 miles across the Rocky Mountains with less than three months of time to train, huh? But in our defense, maybe I should start at the beginning. You see, after finally having the same day off work since Christmas, Rob and I loaded up our Dawes Double Edge tandem bike with an unneccessary amoung of luggage and decided to tackle two mountain passes in a single day. This was all because of a stupid naive sense of accomplishment after our first day of cycle training where we kicked out 20.5 miles in just a few hours and so felt like bosses. But oh, oh no we were not like said ‘bosses.’ Not even their freaking assistants. And we definitely were not ‘boss enough’ to do a 1:4 gradiant as our very first freaking mountain to tackle. And THEN still feel fine enough to do another one. Alas, we didn’t know this at the time and so instead of going luggage free or only with the neccessities, we stuffed our two back panniers with horrible extras like a stupid giant glass bottle (filled to the brim of course), camping gear, and a random pillow because why the heck not. Then we set off on our great adventure, which you can see mapped out below. 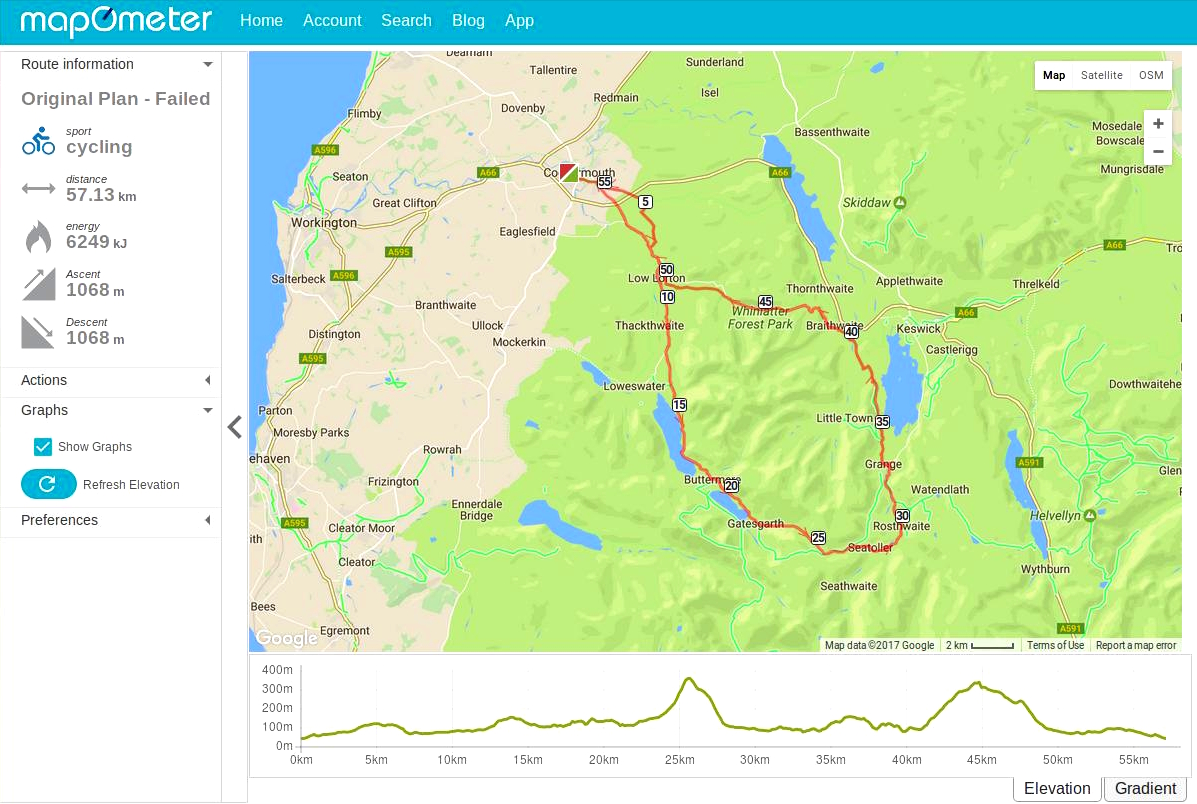 The trip started off well enough. We were out of the house only a few minutes after we said we would be, Rob didn't forget his helmet this time, and I remembered to loop my laces around my ankles so they'd stop getting caught in the pedals. Unfortunately, this 'wellness' barely lasted longer than our first cycle of the feet as the panniers were too close and needed readjusting; but small fixes like that were common neccessities and so we ignored the universe's call to leave them behind. We were making good time when it started to drizzle and given the forecast only called for light patches of rain here and there, we decided to press on. Luckily, it stopped raining quite quickly and we got to fully enjoy the colorful fells and picturesque lakes we were cycling past. 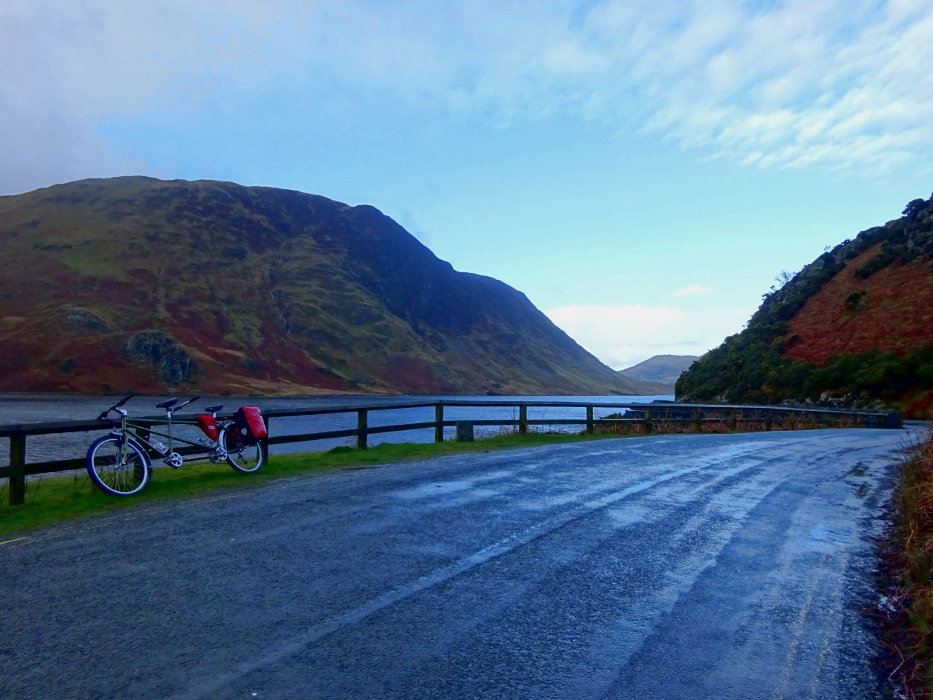 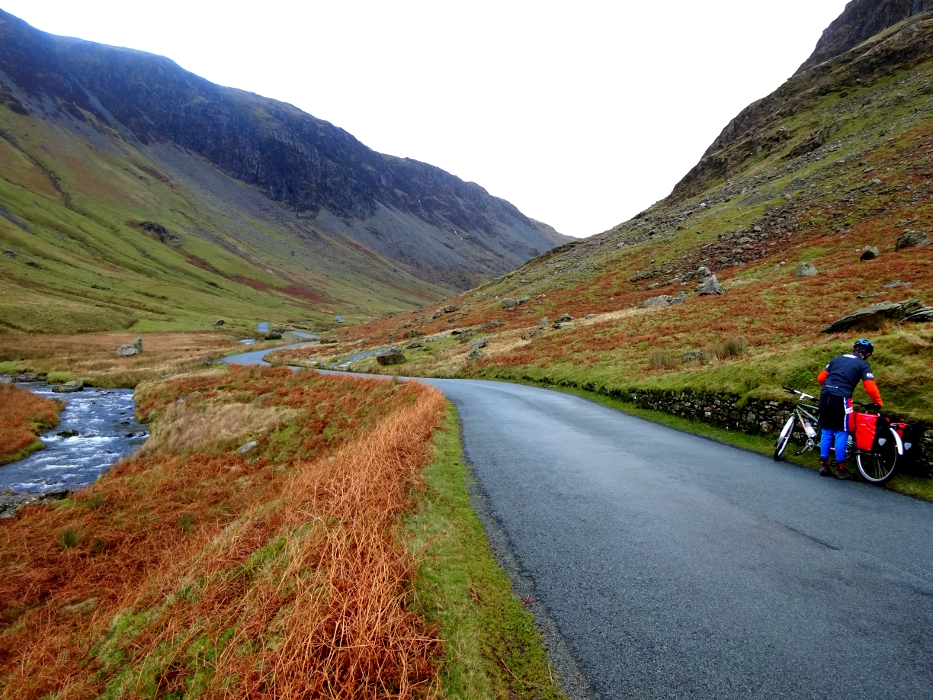 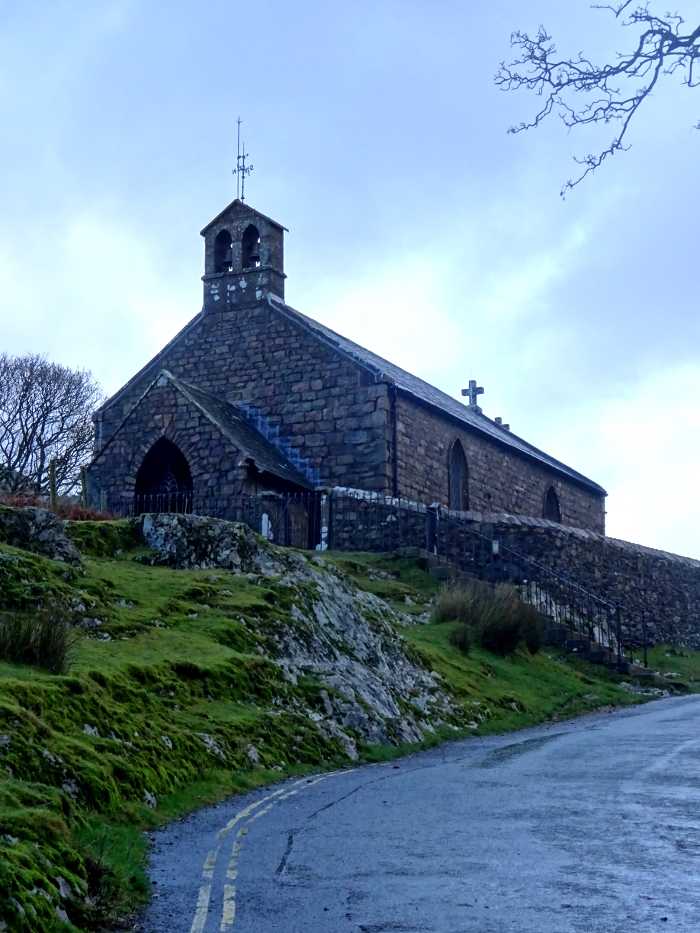 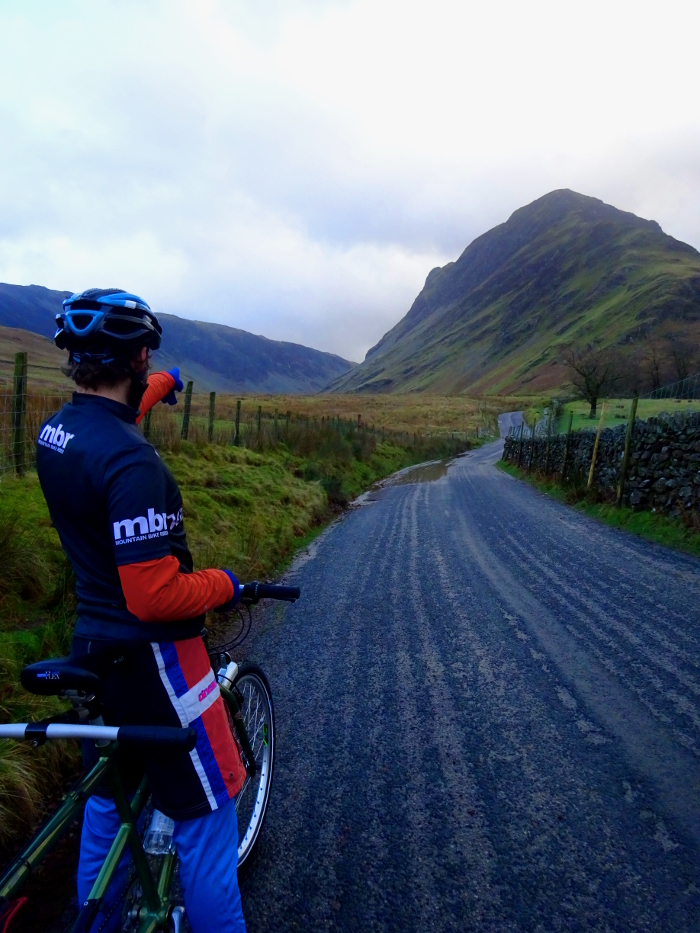 But then we passed a sign claiming a 25% climb up ahead at Honister Pass. However, given we were used to only just feeling something that steep when driving, we (for some very stupid reason in hindsight) thought it we would also 'barely feel it + a little bit more' on a tandem bike. That was unneccessarily loaded. Again, for some very stupid reason. And so as the hill began growing in size, we picked up speed with the hopes of being able to roll up a good bit of it before the real effort kicked in. Now I'd love to say that we beat this beast of a mountain and are all prepared for our 2017 Rocky Expedition in March, but in reality it kicked the snot out of us as we were forced to walk up numerous bits of it to the point of sheer exhaustion. For despite having failed to cycle all the way up Honister Pass, we still had to take a much needed break at the top before beginning the long descent. At this point we were getting hungry and though we had a packed lunch, we were also tired enough to not want to sit on the side of the road in the cold wind and drizzling rain while it cooked. So we made a short detour into Keswick where we popped into Kat's Kitchen - a nice vegetarian cafe that also does full on meals of sheer deliciousness. So whoever says riding a bike saves on fuel, they're clearly doing their math wrong. It cost us $20 to cover a mere 23 miles!!! Though I have to say, it did taste a heck of a lot better than diesel! Granted, I've never tasted diesel, but unless it tastes like the mythical ambrosia of the Gods, then this statement stands. 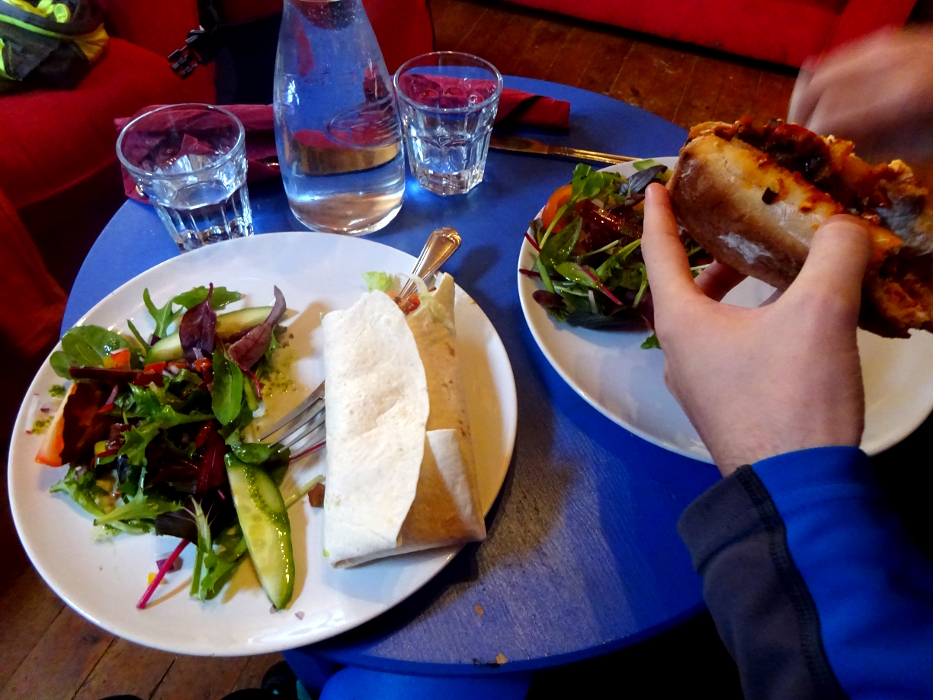 And because we were already completely broken by this point, we decided to skip the second mountain pass up Whinlatter and instead just head home. It might have meant a few extra kilometres, but it'd save us from being found the next morning dead in a ditch somewhere. And as I type this up the following day, I am so freaking happy I'm not working today. For instead of the regular exhausted muscle pain you normal people get (I know because I used to feel this nice, beautiful pain), I feel as if two screwdrivers have been shoved into my kneecaps and a Japanese samurai has attempted the Death by 1000 cuts on my leg muscles. If you're wondering, it's because my stupid brain and nervous system screwed up during puberty, so everything equals pain now. Even something simple like wearing a shirt with a back on it. But meh, that's life, isn't it? And you can't let crap like that keep you down. (: So though we might have failed the ridiculous ride up Honister Pass, we now know what our limit is and can continue training from there. 2017 Rockies, here we come. 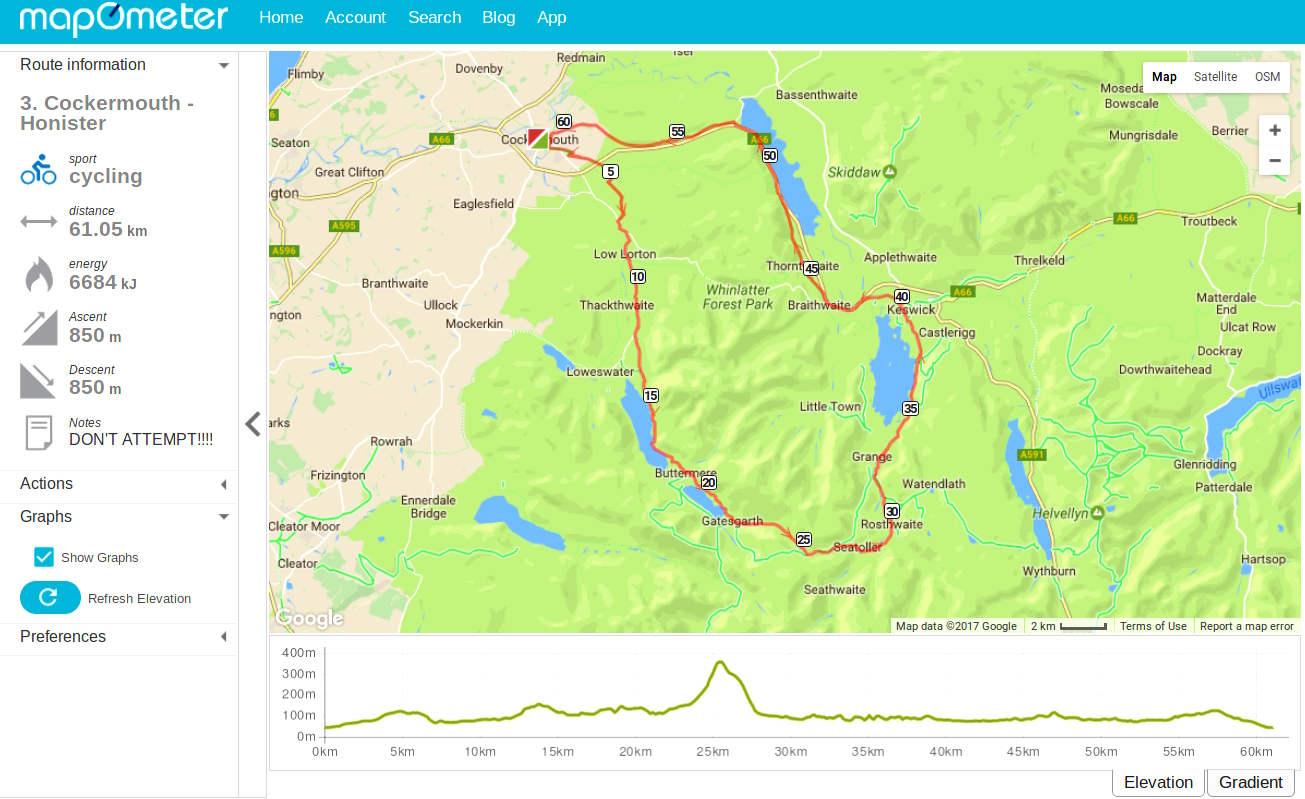 What's the steepest gradiant you've attempted to cycle up? 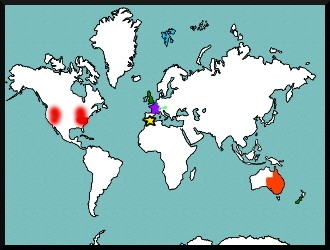 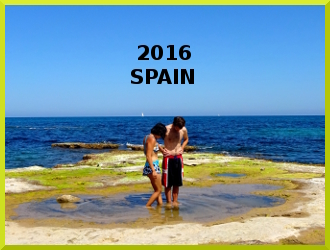 A time of fearing arrest for being robbed, floating in a pink lake that burns like the fires of hell, and playing hosts to friends and family visiting our first apartment together in Rojales, Spain.